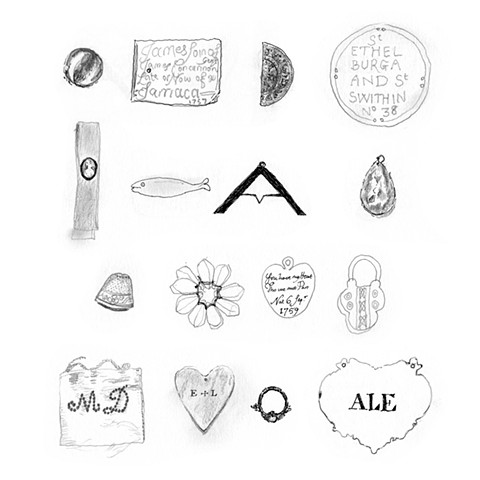 Yesterday I visited the Foundling Museum in London. I had wanted to go there for several reasons, but mainly because I had heard about the foundling tokens. Not wanting to give too much away, but the 'Secret Locket' in my children's book is a foundling token. Our heroine is found, as a baby, in a basket on the steps of the Big House and taken in. She has nothing in her basket except for a golden egg, and a golden locket. The egg hatches into a musical golden bird who remains her constant friend and companion, but no one can explain the significance of her locket... until much, much later!

So many childrens' stories begin with the orphaned or abandoned child. It's a terrific device for taking all kinds of liberties with the adventure, and the opportunity to cut out all kinds of parent-imposed health-and-safety concerns!

The Foundling Museum tells the story of the Foundling Hospital, London's first home for abandoned children and of three major figures in British history: its campaigning founder the philanthropist Thomas Coram (who was from Lyme Regis), the artist William Hogarth and the composer George Frideric Handel. The museum is now in a building adjacent to the original site of the Hospital, which was demolished in 1928.

Sometimes, when a mother gave her baby over to the care of the Hospital, she left a token by which her child might be identified should she ever return to claim them. There were also plea letters, and the Hospital would take a swatch of the baby's clothing or blanket, again for identification purposes. Each child would be re-christened so they lost all contact with their previous identity. The Hospital kept the tokens in its archive. They were never given to the unclaimed children in case it compromised the identity of the mother.

The little objects are heart-breakingly sad. Some obviously made with such care, and no small expense, that one wonders how the mother could not afford to keep her child. Illegitimacy was such a stigma at that time that poverty was not the only reason a woman might not keep her own baby. Some are just curios, of no monetary value, but unique in their form so as to be perfectly suited to their purpose. Half a coin, a strange seed, a tiny fish made of bone, a thimble. Each one hides a story.