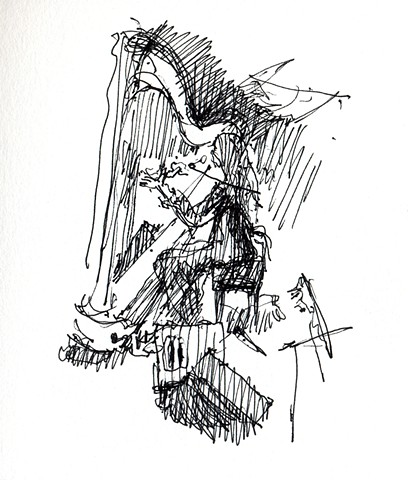 I was very excited about this concert. I had managed to get tickets over Christmas and the Barbican website was nearly sold out. The tickets must have gone in just a few days. As I had mine in my shopping basket someone else bought them and I had to go back and choose the next 2 along the row! Lots showed up on ebay of course, for serious amounts of money. Touts? Who knows. If you could afford that though, it was well worth it.

I am used to hearing an orchestra, and have heard harps with orchestras before, and was a little worried about the sound balance. At the start it did feel a little overwhelming, and I was filled with admiration for the mixing on Ys which is always balanced just right. It seemed to get easier to hear her though, maybe I got used to listening harder. Her voice has changed a little. It was somehow softer to listen too, and more melodious, less raw and edgy, but still with fantastic swoops, pings and whistles. She sounds like the swallows we have on the telegraph wires, they make this great whistling, pinging noise. The whole audience were stock still, and on the edges of their seats. She totally captivates with her performance. She is a wonder of technical ability and sheer creative force. I first heard Sawdust & Diamonds at the ICA when it was so new, she said, it had words missing. To hear it now, fully formed and performed in such a familiar and easy way was a terrific constrast. Drawing was tricky because we were quite a long way back, and she was tiny on the stage. I made some quick drawings of the whole stage with orchestra, and her in context, and a few little line drawings of her and the harp. It wasn't too dark, but when you look at a bright stage and then down at your lap you are temporarily blinded for just long enough to make some invisible marks, and then look back up to the light again. The scene was very interestingly lit, and there were some great shadow shapes. It wasn't really about drawing her so much, as drawing shapes that would hopefully look a bit like the scene afterwards. I like the small one of her guitar/banjo player on the bottom right. Both he and the percussion player were superb. My other half was on the edge of his seat for Bill Callahan's duet (Smog fan). Some new songs were very different again, but with that mesmerising rhythm from African percussion that loops around and repeats into itself like weaving. I'm so excited to hear what she does next.